Temperature monitoring on current AMD processors differs from that on Intel CPUs in some ways:

1. One temperature sensor per CPU

Some other programs show seperate graphs, one for each core. They might even differ by one or two degrees, but this is caused by different times these measurements were taken (sampled).

The value for the CPU temperature of the (digital) on-chip sensor does not equal any real physical temperature but is measured on an AMD spezific scale. This was done to be able to provide more accurate values when the temperature is close to the thermal design limit of the processor and is used to throttle the CPU to prevent damage by overheating. Therefore reliable measurements for CPU idle states is not possible.

If the CPU is idle a more reliable reading can be obtained using the analog temperature sensor located in the CPU socket, but its reading is only available if the the mainboard contains an supported Super IO chip. 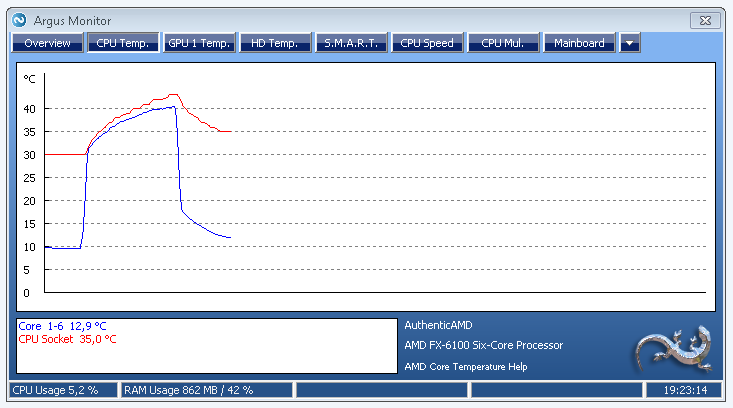 When the CPU is idle again both temperatures decrease and will after some time again asymptotically reach their idle values.

The website overclocker.net offers an AMD temperature information and guide, containing more detailed information and some comments by AMD empoyees concerning this issue.

Please make sure you don't run Ryzen Master and Argus Monitor at the same time (because Ryzen Master interferes with the temperature measurements).

Here is a comparison of 3 runs of a CPU stress test benchmark (to increase the CPU temperature).

In the first and last test the benchmark was running on its own and in the middle one with Ryzen Master in the background.

You can see how running Ryzen Master at the same time interferes with temperature readings in Argus Monitor. 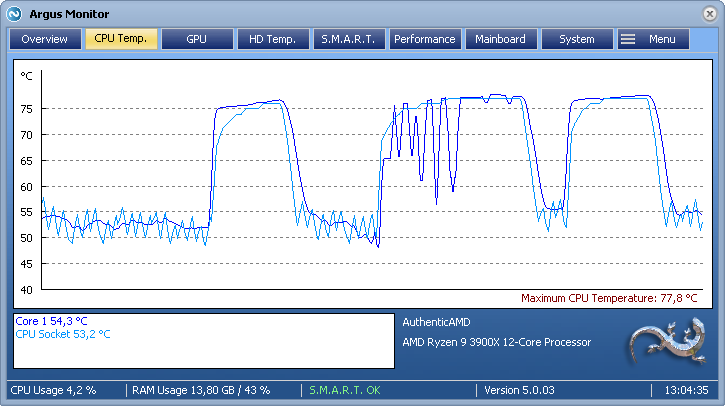